This is "Laminar Magic," designed and built by aerodynamicist Alex Strojnik. In 1987 I had the honor of helping Alex and his wife Cirila to complete the aircraft. I was also very privileged to fly it for a National Speed Record over a 3 kilometer course in FAI (http://www.fai.org/records/) / NAA (National Aviation Association) Category C-1a/0 (land plane, piston engine, propeller driven, under 661 pounds--300 kilograms--gross weight), for "Speed over a straight 3 km course at restricted altitude."

Laminar Magic was designed to prove that with attention to detail in the areas of surface preparation and proper shape ("laminar flow" or micro-aerodynamics), high speeds can be acheived on much less power than most aircraft require. Ultimately this results in reduced cost for the aviation enthusiast.

At 498 pounds, the actual gross weight (including pilot and full fuel) was well below the category maximum. Limited distance between engine centerline and tail boom resulted in limitations in the engine/propeller combination. Since propeller size governs the amount of power that can be transferred to the airstream, the power was limited to approximately 25 horsepower. Despite this tiny power output, Laminar Magic shattered the previous record with 126.7 miles per hour in its first and only record attempt. This is faster than most cars with four or more times the power.

No aircraft before or since has flown faster on less power than Laminar Magic!

After the record flight Dr. Strojnik and I spent many hours discussing a faster design and doing preliminary calculations. However, during that process we discovered another designer who had already begun a very similar aircraft. This is the Aria:

Aria's designer, Sam Walker, had conceived and built it as a self-launching sailplane. It's one of the most beautiful aircraft I have seen, and undoubtedly one of the best powered sailplane designs ever. Sam engineered an ingenious centrifugally-deployed folding propeller that was spring loaded to streamline itself when the engine was not running.

I found out about Aria because Sam had corresponded with Alex on issues of laminar flow design, Alex's speciality. As Alex and I discussed the configuration required to improve the record speed, we settled on a twin-boom tail design. This would yield clearance for a larger propeller and thus a more powerful engine.

When Alex remembered Sam's correspondence about his similar design, he dug it out and it was almost identical to our preliminary design layouts! We reestablished contact with Sam, who had been unable to finish the project (Aria never flew). Eventually he allowed me to purchase it from him to use as a starting point for a new record attempt.

With a shorter wing and a symetrical airfoil I hope to acheive 275 knots! 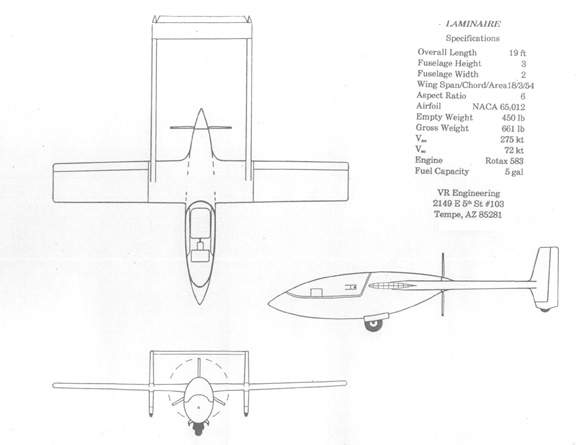 Sadly, Dr. Strojnik passed away in 1995. Mr. Walker passed away a few years later. It is unfortunate that neither man lived to see the new airplane fly. I have not done much on the design since, but hope to someday complete it.

In addition to the parts to assemble one complete aircraft, I have a full set of molds for the fuselage for the Aria, and most of the fixtures and other molds. At some point I may consider offering Aria in kit or plans form. If you have questions about the aircraft or any other aspects of aerospace engineering or aircraft design, please contact me and have patience because I will reply as I have time:

Also please consider joining and supporting the Experimental Soaring Association. They have an excellent and very imformative newsletter.

All information presented on this website is copyright ©2012, Reaction Research, Inc. No component of this website may be reproduced in any form without express written permission.

This information is presented as a service only. Great care is taken to provide the best information possible. However, no warranty of expertise or accuracy is expressed or implied.